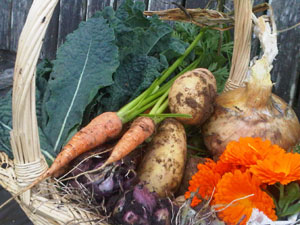 57 billion is not the number of vegans in the world, but the number of animals eaten by humans per year (and that doesn’t include aquatic animals, which number an extra trillion p.a.). That’s a hell of a lot of suffering. (See the home page for current data – much higher now.)

And that’s without all the welfare issues in relation to our rearing, treatment, transportation and killing of animals. It’s hard to justify ethically the consuming of meat and animal products in the affluent Western world; and it’s also not necessary for good health.

Meat-eating is also not an efficient use of land. To feed an equivalent number of people on a non-animal-based diet would use only one-tenth of the land we currently use. Of course, this would also address global hunger, AND allow rewilding. (it should be said that we also need to address population growth, and these figures shouldn’t condone the latter.) And we know that intensive animal farming contributes immensely to deforestation, climate change, soil erosion and water pollution.

How would it be for the planet if we as a species shifted our view from the unconscious Judeo-Christian belief that animals sit lower in the hierarchy of being and were put here for our use (‘dominion’), to the more inclusive ‘Indra’s Net’ approach? In this interconnected picture animals, like us, form a vital part of the web of being, and have intrinsic rights and needs that are nothing to do with our appetites. If we see them in this way, surely it makes their suffering at our hands unthinkable.

Taken to logical limits, this concern seems naturally to lead to an ethic of veganism. This is seen as ‘extreme’ in our culture; but isn’t the rearing, killing and eating of 57 billion animals per year the more extreme position? Just because something – in this case meat-eating – is a dominant ideology doesn’t mean it’s OK. Look at slavery, child labour, racism, sexism.

The blogs on this site will record my own transition from lacto-vegetarian to vegan (and my lapses). The site is also and primarily intended to act as support and a kind of clearing-house for information for people who feel there’s another way to live – one that doesn’t involve the vast amount of suffering animals experience at our hands; and could do with input to go about making the changes.

Included (bit by bit) will be information on the raising and killing of animals (and the environmental costs); why the dairy option doesn’t go far enough; myths and facts about veganism; nutritional info; the health benefits of a vegan diet; the implications for addressing global poverty and starvation; compassionate alternatives in larder, medicine chest and wardrobe; recipes; bibliography and resources; and related info on animal welfare.

Down the line, I hope to include a section on the immense gifts of the plant realm.

I’ll be adding material to this site as and when I can. If you have a considered contribution to make, tips, recipes, book recommendations or links, or details of your own experience, I’d welcome it; please offer it initially via the Comments box.

For possibly the best article ever on the vegan cause, click here.

One thought on “The case for veganism”