1 This first one is not mine, but the invention of Meera Sodha, Guardian food columnist at The New Vegan.

It’s a warm salad of samphire, potato and chickpea, with chaat spices. My version below uses green beans instead.

While I had masses of samphire in my fridge – fresh from a stone wall at Cape Cornwall after leading my Land’s Wild Magic course down there in June, I had none this week, so I substituted French green beans (Cobra) from the garden. I also had no mango powder (strangely enough) but had some coconut flour (I suppose that’s equally strange; it was a gift), so I mixed that with a little lemon juice. We did have our own Charlotte potatoes (tick), which didn’t stay in neat tidy small cubes like Meera’s in her photo, but it didn’t matter as the whole dish is divine.

If you don’t like your food too hot, substitutedhalf a teaspoon each of mild tagine spices and smoked paprika for the chilli.

I topped it with Coyo, and we had slow-cooked garlic courgettes on the side. 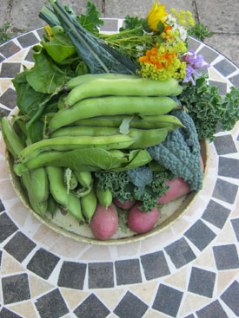 2 I was at Greenway, where I was writer-in-residence last autumn leading workshops as well as creating my own new writing, with the co-ordinator one day. I was treated to lunch in the café, but she’d brought her own delicious-looking ‘allotment soup’. Hmmm. Good idea for the glut.

Our garden can come up with the goods now. (I love the Keravel Pink onions which we brought back as sets from Brittany.) So here’s my herby cream-of-garden soup (for 2):

1 double handful fresh sorrel leaves if you can get them – sorrel is easy to grow (wild sheep sorrel will do, but beware it might be tough by now)
1 handful fresh parsley
1/2 handful fresh marjoram
1/2 a dozen sage leaves (all chopped finely)

SOFTEN the onion in the oil. Add sliced courgettes and garlic, and when they’re soft add the potatoes. Turn up the heat a little and cook for five minutes, stirring frequently so the potatoes don’t stick, then add the beans.

Add half the stock etc; add more as needed (keep the soup thick). Throw in the spices, and leave to simmer for an hour (stir now and then).

Then add the Coyo and finely chopped herbs, stirring well, and turn off the heat.  Leave to sit for 5 to 10 minutes, and serve with crusty bread with maybe a splash of olive oil. You can sprinkle yeast flakes on top.
3 Pasta e fagioli with mushroom sauce (for 2)
When I was a romantic young student, I met an Italian in a remote part of the Catalonian Pyrenees, and eloped with him right up onto the border with Spain, where we spent a winter in a commune with no electricity, an open fire for cooking, and water collected from a spring half a kilometre away.

Once that autumn I got chased up an apple tree in an ancient abandoned orchard by a trio of wild boar who clearly considered scrumping apples to be their prerogative; but that’s a different story.

Later, I married him (the Italian, not a boar), and he’s the father of my daughter. He died suddenly in late 2015, and in his memory I offer this recipe. He was a good cook, and pasta e fagioli (beans) was one of his staples, though the sauce here is mine.

He also used to make all our bread by hand, and, as he was taught by his rural grandmother, he’d use no yeast except what he could gather by leaving a tea-towel out in a clover-field overnight to collect the dewy clover-yeast (yes, really). He was also the best gnocchi maker I’ve ever known.

Put a big pan of water on to boil.

When the water comes to the boil, throw in some pasta (I use red lentil pasta as I love it and it’s full of protein), and a double handful of green beans (or to be more traditional other podded beans) chopped into roughly 2cm lengths. They’re ready after 8–10 minutes (salt at the end). Drain and put back in pan with a dash of olive oil.

Mix the mushrooms and the sauce and stir into the pasta e fagioli.
Finally, 4: butterbean and cashew (or other nut) paté or spread
This works well with broad beans early in the season and later podded beans like soissons or borlotti too.

Put into a whizzer (I use a handheld Braun stick thing):

I think it might also be good with cucumber and dill weed instead of the other herbs; also sorrel.

In what they’ve described as a ‘landmark ruling for animal rights’, Go Vegan World is celebrating:

‘In a landmark decision the Advertising Standards Authority (“ASA”) has ruled in favour of the Go Vegan World campaign, finding that our ad that lets people know that dairy is inherently inhumane is not misleading. This independent, official finding that our ad has been objectively substantiated with supporting evidence is hugely significant for the campaign and for animal rights.’